Study of geological sections by the RAP method

The surveys conducted under a contract with the Department of Transportation in Ohio, can illustrate the advantages of the RAP method for geological setting studies. Measurements were carried out along a number of lines, one of which is shown in the Figure. One of the problems the construction firms often face in Ohio is the wide development of coal seams in this state.

As a result, the subsidence of the soil, on which construction is being carried out, is a frequent case here. The major objectives of the RAP-method surveys were to map the coal seams, to determine the groundwater level and identify geological features of the section. The RAP instrument coped perfectly with all the tasks. The coal seams were located at a depth of 28 to 40 feet and traced over the whole length of the line. At a depth of 60 feet, an aquifer was revealed to be underlain by clay sediments. Below the 70 feet level we detected a boundary indicative of a new rock layer. This can be clearly seen from the sharp change in the layering structure of the geomechanical section of area under study.

This experimental work, carried out by the RAP method and applied to searching for exposed pipes, took place in Archangel province and in the Ukrainian Shield ( Priazovski Massif). 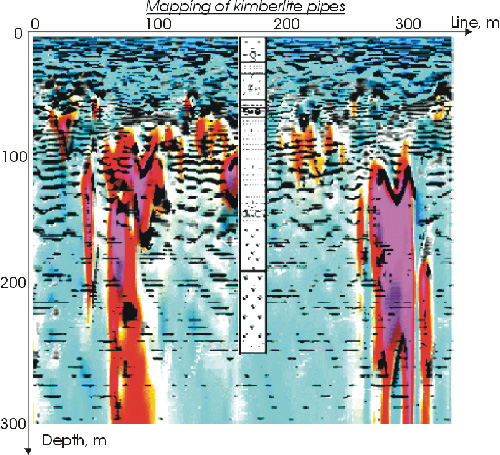 The work was carried out on some objects in Archangel province. The section shown above (see picture) illustrates the capacity of RAP to reveal and outline the overburdened Kimberly pipes. According to RAP data, covering the pipe were quaternary sediments(Q), terrigenous-carbon deposits of middle carbon (C2-C3), rocks of crater (D3-C2) and aperture diatreme fractions (D3-C2). As shown in picture, all of these sediments covering the pipe are precisely mapped. The locations of the inner and outer contacts of pipe are very precisely fixed. The drilling work required to find the structure of that ground was much less due to knowing where the pipe starts and ends and what is the structure of the pipe for the purpose of diamond exploration. Thus, the RAP method can be efficiently used in the search for diamonds in all stages, and can be used in conjunction with other methods.

A horizontal water-carrying layer was surveyed and mapped as shows in Figure. Chemical waste leakage from a storage tank was detected.

Subsurface survey in preparation for construction

Figure shows a subsurface profile of a site where construction of a pipeline at the dept of 20 meters was planned. The survey was done to ensure the most suitable selection of the pipeline path. Various soil layers are identified in the picture. 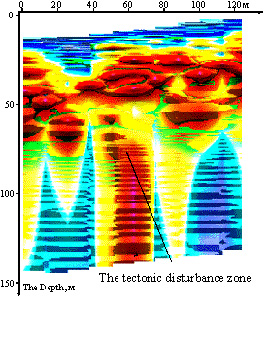 The search for radioactive wastes was carried out in St. Petersburg in 1996. Despite the small number of points at which measurements were made for a given distance at the location of the wastes, seven tanks filled with radioactive liquid were located at a depth of 2.5 m (see picture). The results of the carried out work allowed for significantly accelerating the deactivation of these discovered waste tanks. The tanks were made of a material which was not ferro-magnetic but concrete plus other non-ferro-magnetic materials, and those tanks were located in the center of St. Petersburg where the high level of noise and congestion would make it extremely difficult to use the background art methods. 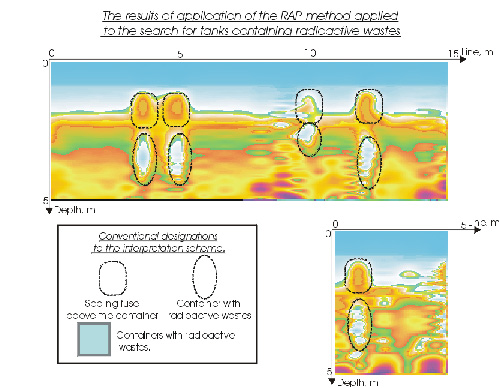 Surveying for filtration zones in dams

The dam of one of the water reservoirs of the Petrodvoretz (Russia) fountain supply system was broken and needed reconstruction. The dam was also to be searched for leakages that could cause new accidents. RAP equipment was used to carry out measurements along the dam embankment and resulted in the identification of hazardous zones (see Figure). They survey also helped to determine the necessary extent of reconstruction and improved the reconstruction strategy.