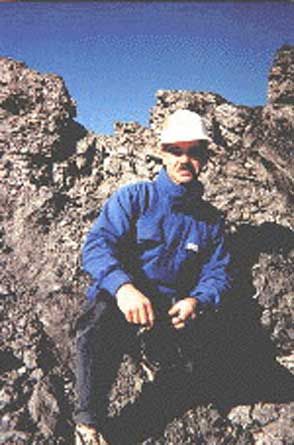 Born in 1961 to a family of geologists, in 1983 Mr. Zuykov graduated from the Geophysics Department of (now, St. Petersburg) Mining Institute with a diploma in Mining Engineering and Geophysics.

Over a period of 1983 to 1994 Mr. Zuykov worked in Leningrad Geophysical Expedition, at first as an operator, then as a chief of a field group, later of a geological team; and in 1994 as Chief Geophysicist of the Ground Geophysics department. During this period . Zuykov participated in field works in Yakutia, Murmansk region, Karelia, and in different regions of the Central Russia. He both conducted and supervised ground magnetometer, electrical, high-precision gravity, airborne magnetometer and airborne electrical surveys. The surveys were focussed on diamond and gold exploration. Zuykov was among the discoverers of diamond deposits in the Kola Peninsula. He was many times recognized the best geophysicist of the Expedition. In 1992 he was awarded the diploma of the National Economic Achievements Exhibition (VDNKh) of Russia. In 1993 to 1994 Zuykov was a consultant to Canadian and Norwegian companies on diamond exploration methods.

In 1994 Zuykov in conjunction with A. Glikman started working on the use of the Spectral-Seismic Profiling method in geology.

In 1995, Zuykov developed the Resonance Acoustic Profiling (RAP) method, which included the development of the ideology of the method, data processing techniques and software, the design and manufacturing of the field RAP equipment. In the same year, Mr. Zuykov carried out the testing of the method in real conditions in the exploration areas (see Figure) of the Polar Urals and the Murmansk region.

In 1996 I. Zuykov, V. Lazebnik and B. Kulmametyev set up the InterGeo-RAP company in St. Petersburg, Russia. Mr. Zuykov contribution was the RAP method. The activities of the company covered the introduction of RAP into geophysical practice (I. Zuykov) and airborne geophysical data processing with the use of St. Petersburg (former Leningrad) Geophysical Expedition processing techniques (B. Kulmametyev).

In 1997 Zuykov quit the company and continued his work on the method in a publicly owned company "RADEK" , St. Petersburg.

In 1998 Mr. Zuykov was hired by Environmental Investigation Corporation, USA. As a result, he completed the development of the theoretical principles of the RAP method, designed a new generation of equipment and software, and had the method patented. The new RAP-complex provides penetration to a depth of 2 km, is much lighter and allows acquisition of preliminary data (geomechanical cross-section) in no more than 2 to 5 minutes after data collection.

At present, Igor V. Zuykov is working on the further development and refinement of the RAP method and instrumentation. The resulting improvements in performance were evidenced by successful results obtained in the USA and by "RADEK" in Russia and Ukraine..